Enter your City name or Pincode

Gudivada is a small town in Krishna district of Andhra Pradesh. It is also a municipality and revenue division in the district. The name Gudivada is derived from ‘Gudi’ and ‘vada’ which mean temple and settlement respectively. The name is taken from Telugu language.

The town has seen habitation from 3rd century. There have been numerous excavations done in the region. A major archeological excavation done at Gudivada yielded ancient Buddhist Stupa moulds and Jain relics. The town is a perfect example of religious diversity. People of various religions live harmoniously in the region. It is also an important religious tourist attraction.


Geography and Demographics of Gudivada

Gudivada has typically hot and humid climate. The close proximity to the Bay of Bengal is the main reason for its sultry weather. May and June are the hottest months where the maximum temperature can sometimes touch 50 degree Celsius. Winters are cool and pleasant with a minimum temperature of 9 degree Celsius.

Although Gudivada is a small place, but there are many tourist attractions in and around the place. The most common place to visit near Gudivada include the following.

Vijaywada is a major city of the state. The distance between Gudivada and Vijaywada is about 42.5 km. The main tourist places to see in Vijaywada include the following. 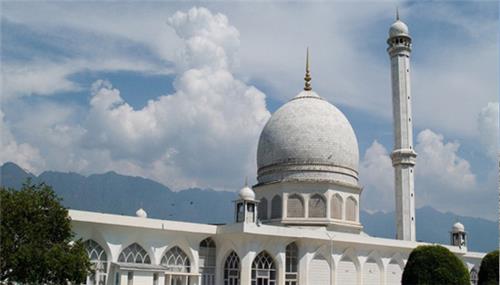 Hazratbal mosque is a fine example of the grandeur and glory of the bygone era. It stands tall and tells a tale of the past. The mosque is one of the most popular tourist attractions of the region and attracts tourists from different parts of the country. A holy relic of Prophet Mohammed is kept in this mosque and is displayed once a year. The place is considered to be very holy for Muslims. This beautiful mosque made out of white marble is located in the heart of Vijajwada city.

Museums keep the glorious past alive and so does Victoria Museum of Vijaywada. This beautiful archeological museum as established in 1887. It houses many ancient artifacts. The main attractions of the Museum are Mahishasura Mardhini (Goddess Durga) and Buddha images. In addition to these, the museum also exhibits pre-historic tools, stone and copper plates, gold and silver coins, weaponry, textiles and pottery. There is a huge image of Lord Buddha made out of white limestone in the museum. Also there are various ancient scriptures of Lord Shiva as old as 4th and 5th century. The entry to the museum is free. And it is open from Saturdays through Thursdays, 10:30 am – 5:00 pm.

Another major tourist attraction of the region is Mogalarajapuram Caves. The caves are home to three ancient temples which were built in 5th century. One of the temples has beautiful and intricate carvings of Ardhanariswara. The other two temples are carvings of Lord Vinayaka and Lord Shiva in the Nataraja avatar. The caves are located just 5km from Vijaywada city.  The place is a delight for photographers and history lovers.

Ghantasala is a small town and mandal headquarters in Krishna district of Andhra Pradesh. It is a major center of Buddhist sculptures. It is believed that the remains of a Buddhist stupa and various sculptural slabs were found during 1920s. Ghantasala is located at a distance of approximately 38 km from Gudivada. 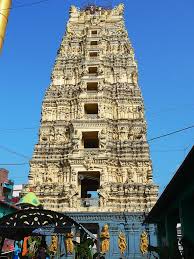 Ksheera Ramalingeshwara Temple is one of the five Pancharama Kshetras. The temple is dedicated to Lord Shiva, who is locally referred to as Ksheera Ramalingeswara Swamy. The Shiv Lingam in the temple was established by Lord Vishnu. Legends say that staying for s single day in Ksheera is equivalent to staying for one year in Varanasi. The temple tower is the tallest temples in the state of Andhra Pradesh. The height of the temple is 120 ft and it has 9 floors. The temple was built in the Chalukya period during the 9th century.
It is a major religious tourist attraction and devotees from different parts of the country visit the temple to seek blessings of Lord Shiva. The shivling at the temple is white in color. 72 pillars made from black stone adorn the temple mandapam. Gokarneshwara and Vigneshwara alayas are situated at the left and Kshiralingam located in the center. At the right are Subramanya Swamy and Janardha Swamy. Nandi, the bull is seated at the center. The temple complex has many smaller shrines dedicated to Veerbhadra, Goddess Laxmi, Sun God, Nagareshwara Lingam, Naga Sarpa etc. Mahashivratri is a major festival celebrated at the temple.
Palakollu is located at a distance of about 93 km from Gudivada.

How to reach Gudivada

By Road
The town is well connected to other small towns and neighboring cities in the state. APSRTC bus station caters to public bus service.

By Rail
Gudivada town has its own railway station. It belongs to South Central Railway zone and falls under Vijaywada railway division. The Gudivada Railway Station is a junction of tracks from 3 directions to Gudivada –
By Air
The nearest airport to Gudivada is Vijaywada, just 25 km.

Are you a Business Owner?

Add the products or services you offer